While United States Attorney General Eric Holder announced six months ago that he would be leaving his office, he is still serving and waiting for his replacement to be confirmed and take control of the US Department of Justice. In the meantime, he has not let up on his belief that criminal justice reform is a very pressing issue for 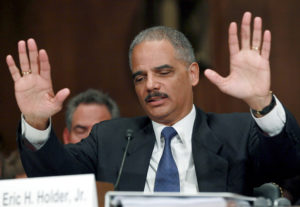 In a speech to the Bipartisan Summit on Criminal Justice Reform, a long speech, there was a section that should be posted loud, clear, far, and wide. It speaks to the heart of what true criminal justice reform means and some of the reasons why it is necessary. The section is posted below:

“We must reject the notion that old practices are unchangeable, that the policies that have governed our institutions for decades cannot be altered and that the way things have always been done is the way they must always be done. When the entire U.S. population has increased by a third since 1980, but the federal prison population has grown by almost 800 percent, it is time – long past time – to look critically at the way we employ incarceration. When the United States is home to just five percent of the world’s population but incarcerates almost a quarter of its prisoners, it is time – long past time – to reexamine our approach to criminal justice. And when estimates show that a staggering 1 in 28 American children has a parent behind bars and that the ratio for African-American children is 1 in 9, it is time – long past time – to take decisive action in order to end a vicious cycle of poverty, criminality and incarceration that traps too many individuals, degrades too many families and devastates too many communities.

That means more state legislatures must end felon disenfranchisement – and so many other barriers to reentry – for individuals who have served their sentences and rejoined their communities, and invest in alternatives to incarceration like drug courts – something I’d like to see in the next five years in every federal district in America. It means Congress must act to restrict and refine those crimes to which mandatory minimums apply and extend the Fair Sentencing Act so that no one is serving a sentence based on a disparity in punishment between crack cocaine and powder cocaine offenses that Congress, the President and the Attorney General have all declared unjust. And it means gatherings like this one must continue to bring together leaders and advocates, academics and public servants, from all backgrounds and circumstances, to renew our commitment to this vital cause.”

The full text of Holder’s speech can be found at the DOJ’s website, and is definitely worth the time it takes to read in full.