It Stated With A Federal Probation Violation

White City, AL – A high-speed chase ended on Thursday, March 26th with the arrest of David Reynolds of Hanceville, Alabama. This, from a story posted by The Cullman Times before the weekend. Here’s how the story begins:

“A high-speed chase ended in a crash south of Hanceville and the capture of a man wanted for a federal parole violation. 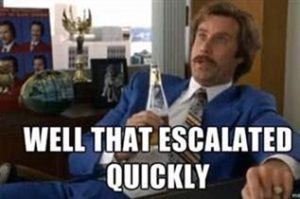 Reynolds, wanted for a probation violation, leads police on a high speed chase.

An officer spots Reynolds and attempts to pull him over. Instead of complying, he speeds away and leads law enforcement on a high speed chase that ended Reynolds wrecking his truck. What started with a possible routine traffic-stop-turned-arrest, turned into a very dangerous situation.

Reynolds may have been facing a few years inside prison walls for his probation violation. That’s a federal court issue. Instead of just pulling over when an officer spotted him in his truck, he ran away. This is (most likely) going to add Alabama’s version of the following charges: reckless driving, reckless endangerment, speeding, resisting arrest, and possibly even attempted vehicular assault.

Learn From His Mistakes

If, in the process of living life, you become wanted for a federal probation violation, nothing you can do can make that problem go away. It is possible, however, to make things much, much worse. Reynolds may have been facing a few years in federal prison for his violation (if the government could prove that Reynolds did, in fact, possess a gun when he wasn’t supposed to). After this high speed chase with local law enforcement, though, he is facing many more years in state prison to add to the federal time he still has to do.

Lesson #2: Running away from a federal probation violation doesn’t make it go away.

Lesson #3: Don’t be like this guy. If you’re in trouble, get an attorney and face it head on. It may just save years of your life that would otherwise be wasted behind bars.