Criminal Defense – A System of Perpetuation

Criminal defense is a lucrative business. Lawyers spend years in a prosecutor or public defender’s office working long hours for low pay (and huge case-loads) just to get the experience in the trenches of criminal trials to finally switch to private practice. That’s where the real money is.

Many people realize that the American system of criminal justice is badly broken, and the criminal defense industry along with it. Ever wonder why defense attorneys don’t 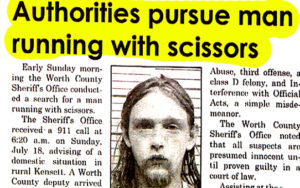 “I can get you a plea for only 3 years in prison!”spend big bucks for lobbyists to change the laws that ensnare so many of their clients? Because that would mean fewer paying clients.

Is Everything a Crime Now?

As sarcastic as the titles of this section may seem, America is really becoming a society that is ciminalizing everything. There was a book published a few years ago titled, “Three Felonies a Day” by Harvey Silverglate, and recently we’ve been following @CrimADay on Twitter.

We’ve all seen the online galleries detailing whacky laws in different states. But what about real laws that carry real prison time, and are enforced? Here are a few:

In an article entitled The Crimes of the Century, Matt Kaiser details a recent case that shows that these aren’t just whacky laws that don’t get enforced.

As an example, let us consider a recent case from the Western District of Pennsylvania.

According to a recent press release from that office, a woman was indicted for theft of United States Mail. (Because it seems awfully mean to make her more Google-able, I’m not going to use her name here.)

Apparently, she looted a greeting card that was being sent to someone in Cranberry Township.

The article goes on to describe the prosecution of this crime, that resulted in the theft of two crisp $20 bills. Maximum penalty? 5 years and up to a $250k fine. Over $40. How much has the government already spent prosecuting this case? How much has she paid her attorney for her criminal defense? Who knows…

When everything can be made criminal, two things happen. First, prosecutors can prosecute anybody and begin to do so selectively. This means that prosecutors could target political enemies, and with absolute power comes absolute corruption (eventually). Another effect from the fallout of this is the booming criminal defense industry, feeding lawyers to strive for more clients. That leads to the second point.

Second, the class system evolves from this. Lawyers and workers inside the criminal justice system, and civilians. Have you ever noticed how many politicians are also lawyers? Those that benefit from the laws are making them!